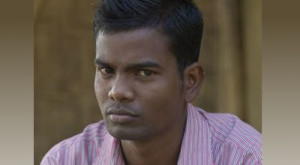 Deeply committed to his religion, Jayesh went to the local temple every morning to worship his gods and godesses. One day, he met Gospel for Asia pastor Nabhith as they were walking past one another through the village. It didn’t take long for Pastor Nabhith to share his love for Jesus with Jayesh.

As he listened to Pastor Nabhith talk about Christ, Jayesh assumed the man was forcing local people to convert to Christianity. Jayesh became deeply angered. He told Pastor Nabhith to move out of the village and stop converting people or he would present a case against him to the local law enforcement.

Pastor Nabhith calmly told Jayesh he wasn’t worried about a case being brought against him because he hadn’t done any of the things Jayesh was accusing him of.

After hearing Nabhith’s response, Jayesh decided he would not just report the pastor to the police—he would kill him.

To justify his murderous scheme, Jayesh was determined to catch Pastor Nabhith doing “evil things,” so he began to watch Nabhith very closely. Wherever the pastor went, Jayesh was close behind.

Instead of finding evidence against Nabhith, however, Jayesh found there was nothing forceful in the way the pastor shared his message with men and women. He saw Pastor Nabhith visiting the sick and desperate villagers out of a genuine love and concern for them rather than with a secret motive to gain power for himself or make the villagers convert to his faith.

Was it possible Jayesh had misjudged this servant of God?

When Pastor Nabhith was at his church one Friday night to pray with other believers, Jayesh sat outside the building listening to the way the group spoke to one another and to the Lord. He heard prayers full of compassion for sick people and genuine concern for the villagers’ various needs.

Jayesh wanted to join them inside the church, but he was nervous. He realized how desperately he needed God’s forgiveness, and he began to weep.

Pastor Nabhith heard the loud cries and went outside to find Jayesh, the man who had recently been so angry and bitter, crying out to God. The men went inside the church and prayed together.

Before the congregation, Jayesh shared that his plan all along had been to murder Pastor Nabhith. He repented and chose that day to follow Jesus.

“Now I know that there is no blame on him,” Jayesh later said about Pastor Nabhith. “He worships the real God.”

Jayesh and his entire family now joyfully worship God along with Pastor Nabhith, whose life is truly a reflection of the loving God they serve.

WATCH: Keep Both Eyes Open for These Shemitah Events

After The Death Of Their 12-Year-Old Daughter, Parents Find The Letter She Wrote To Her Future Self

How the Devil Uses Halloween to Attack Your Children

WAR ON THE CROSS…

7 Ways to Escape the Great Falling Away

Four words which changes your lives