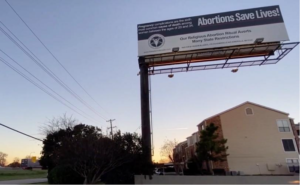 February 10, 2021 (LifeSiteNews) — Just weeks into 2021, and abortion is front and center in American politics once again, with more than a dozen pro-life laws surfacing at state legislatures, Biden’s executive orders, and the balance of power tilting once again towards the blood-bloated feticide monopoly Planned Parenthood. And speak of the Devil, the Satanic Temple is at it again as well, this time in Texas.

I’ve followed the pro-abortion efforts of the Satanic Temple in the space for a couple of years. Last August, they launched a campaign claiming that “Satanic Abortions Are Protected By Religious Liberty Laws,” recasting abortion as a religious ritual to do an end-run around state restrictions; in June I detailed how they’re attempting to turn religious liberty laws to their advantage. The weirdest Satanic story of last year was that of a mom who was so triggered by the threat to legal abortion posed by Ruth Bader Ginsburg’s death that she joined the Satanic Temple in response.

Texas, of course, represents the Satanic Temple’s attempt to gin up controversy by utilizing maximum offensiveness in a traditionally red state. To that end, the Satanists commissioned a billboard along Interstate 20 in Garland reading “Abortion saves lives!” As if that weren’t enough, the 10 by 40 foot billboard also informs commuters (falsely) that “Our religious abortion rituals avert many state restrictions,” a reference to their campaign to classify abortion as a religious ritual to utilize religious liberty laws in defense of feticide.

According to Lucien Greaves of the Satanic Temple, two similar billboards have been erected in the Houston and Miami areas. He assured media outlets that the “point of the ritual isn’t to glorify having the abortion. It’s to affirm to the person having the abortion, that what they’re doing is not a violation of their deeply held beliefs, it’s something affirmative for them.”

Even Greaves is aware that this tactic may be too clever by half—and that declaring abortion a religious ritual has ancient undertones that ring familiar for horrifying reasons. “We’re not doing anything of the type that would equal something even close to infant sacrifice,” he stated. “We’re putting the safety and welfare of the pregnant person first.” The child in the pregnant person’s womb, of course, is the one being aborted—or sacrificed.

Some Christians have spoken out against the billboard, opposition which Greaves predictably welcomes. Controversy brings publicity, and the Satanic Temple desperately wants publicity. The Satanists are also attempting to secure billboards in Arizona, and presumably elsewhere. If people become upset, angry, or even attempt to get the billboards removed—so much the better. The Satanists are confident that America’s religious liberty regime means that their beliefs are on equal footing with Christianity and other religions, and thus they can use the freedoms guaranteed by liberalism to game the system in defense of feticide.

As G.K. Chesterton famously noted, “When a man stops believing in God, he doesn’t then believe in nothing, he believes anything.” As upcoming generations increasingly identify as either secular or hold a cobbled-together spirituality designed to serve only themselves, we’re likely to hear a lot more from the Satanic Temple.